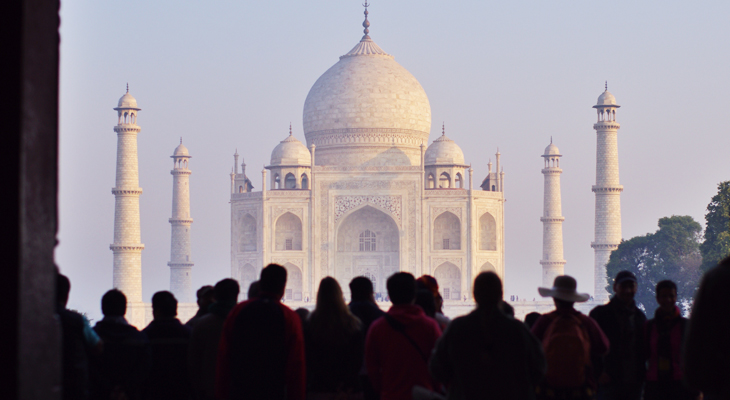 For our valued clients planning to visit India for the first time, we recommend the Golden Triangle tour - covering Delhi, Agra, and Jaipur. It is the most popular circuit in India for tourists. Itinerary from Golden Triangle Tour incorporates three of India's most renowned cities - Delhi, Agra & Jaipur. Each one has incredible history, splendor & grandeur.

Delhi - The capital city of India

Delhi forms one of the three pillars of the golden triangle in the north of the country. With its rich array of colors, flavors, and attractions, contemporary Delhi will inspire, surprise, fascinate, and impress you at every turn. In Delhi, you should visit the India Gate, Red Fort, Jam Masjid, Chandni Chowk, Kutub Minar, Jantar-Mantar, Laxmi Narayan Temple, Akshardham Temple, Bahai Temple, among others. Old and new coexist in perfect harmony in this city. You can find a wide range of experiences at Connaught Place, across Chandni Chowk and South Extension, from colonial pillars to lanes and malls. Additionally, Delhi offers a variety of shopping, dining, and sightseeing opportunities.

An ancient city on the banks of the Yamuna River, Agra was founded in 1956 by Sultan Sikandar Lodi. Mughal capital for more than four centuries, Agra remains a major tourist destination for its magnificent Mughal buildings, most notably the Taj Mahal, Agra Fort, and Fatehpur Sikri, all of which are UNESCO World Heritage Sites. Taj Mahal is a must-see attraction for tourists from all over the world.

Jaipur - "The Pink city" and the capital capital of Rajasthan

Maharaja Sawai Jai Sing II founded Jaipur in 1727, also known as the Pink City. The grand heritage hotels that were once the residence of Maharajas are honorable examples of Jaipur's first planned city status in India. Jaipur's gardens and parks are well laid out and it has attractive monuments. You can visit the Amber fort, City Palace, Jantar Mantar, Hawa Mahal and amble along on camelback while enjoying the cheerful people in multi-hued costumes.

The Golden Triangle, commonly known as Delhi, Agra, and Jaipur, is a great family adventure filled with amazement, wonder, and discovery. Especially for first-time visitors, the golden triangle tour is the ideal introduction to the culture, history, and tradition of India. These three cities have a lovely mix of Mughal, Persian, and Hindu architectural structures that show their rich history, glory, and grandeur.

Begin your journey in Delhi, India's capital and former capital of the Mughal Empire. Visit the Red Fort, Jama Masjid, and Qutub Minar, and have paranthas, chaat, and kebabs at Khan Market, as well as jalebis, rabdis, and kulfis. The mystical Taj Mahal, located in the heart of Agra on the banks of the Yamuna River, will enchant you. Finally, see the City Palace, Hawa Mahal, and Jantar Mantar in Jaipur, the royal capital and a red-sandstone city.

• On arrival in Delhi, you are met and transferred to the hotel.
• After checki-in process and take some rest.
• After freshen up, proceed to QutubMinar, an excellent example of Afghan Architecture.
• Enjoy the serenity of Bahai Temple. Situated at top, the Kalkaji Hill. It is also known as "The Lotus Temple" due to its distinctive lotus shaped design in Marble.
• You can then proceed to visit Raj Ghat, a memorial dedicated to Mahatma Gandhi at the west bank of the Yamuna River.
• You can also drive past Rajpath overlooking the Rashtrapati Bhawan and Parliament House and visit the India Gate.
• After sightseeing tour of Delhi, return to the hotel for overnight stay.

• Morning after delicious breakfast and drive to another historical city of Agra.
• On arrival at Agra, check-in to your hotel and take some rest.
• After freshen up, visit the world famous Taj Mahal -built by the Mughal Emperor Shah Jahan in the memory of his beloved wife Queen Mumtaz.(TajMahal closed on Friday )
• After Taj Mahal, visit Red Fort in Agra- historical fort in the city of Agra. It was the main residence of the rulers of Sikarwar clan of rajputs until mughals occupied it and Mughal Dynasty until 1638.
• After the sightseeing of city of Taj, return to the hotel for overnight stay.

DAY 03 : AGRA TO JAIPUR VIA FATEHPUR SIKRI – KNOWN AS "PINK CITY OF INDIA"

• After delicious breakfastt drive to the 'Pink City', Jaipur.
• En route visit at Fatehpur Sikri - was the short-lived capital of the Mughal empire between 1571 and 1585 while Akbar was the EmperorHere you will be visiting the beautiful Buland Darwaza, which is one of the largest gateways in the world.
• After the visit of Fatehpur Sikri, proceed to Jaipur.
• On arrival at Jaipur, check into your hotel and take some rest.
• After freshen up, evening free at leisure, strolling down the markets and shopping.
• Overnight stay at the hotel in Jaipur.

• visit the magnificent Amber Fort - was constructed in 1592 AD by Raja Man Singh, the Rajput commander of Akbar's army. Situated on the top of Aravali Hill overlooking the Pink City of Jaipur.
• On your way back, visit Jal Mahal ("Water Palace") is a palace in the middle of the Man Sagar Lake in Jaipur city made of Red Sandstone.
• Later, visit to City Palace and Museum - The City Palace is a palace complex, situated in the core of the Pink City Jaipur. The beautiful complex comprising numerous edifices, vast courtyards and attractive gardens, is a souvenir of the majestic history.
• In the evening, stop at Hawa Mahal - The renowned 'Palace Of The Winds', or Hawa Mahal, is one of the prominent tourist attractions in Jaipur city. Located in the heart of Jaipur.
• Later you can chose to explore the nearby markets.
• After the city tour of Jaipur, return to your hotel. Overnight stay at Jaipur.

DAY 05 : JAIPUR TO DELHI AND DEPARTURE

• have a healthy breakfast today and later check out from the hotel.
• Later drive back to Delhi to board flight for your onward journey.
• Tour concludes here.

On arrival in Delhi Airport, you are met and transferred to your pre-booked hotel. Check in at hotel. After freshen up visit Qutub Minar - Afghan architecture at its best in Qutub Minar. Later visit the Bahai Temple for a sense of spiritual calm. It is located on Kalkaji Hill. A lotus-shaped memorial to Mahatma Gandhi, Rajghat, marks the spot where Gandhi was cremated in 1948 and is also called the Lotus Temple because of its unique design. After sightseeing return to hotel. Overnight stay at Delhi.

After breakfast, check out from hotel and drive to Agra . On arrival in Agra Check in at the hotel. After freshen up, visit This TajMahal is dedicated to the memory of Queen Mumtaz, the beloved wife of the Mughal Emperor Shah Jahan. (This TajMahal closes on Friday.) Sikandra (Akbar`s Tomb): Akbar`s mausoleum lies here. The building is a mixture of Hindu, Muslim, and Persian influences. Approximately 400 years old, the Agra Fort was built by three generations of Mughal Emperors. After sightseeing, come back to hotel. Overnight stay at Delhi.

After breakfast, drive towards Jaipur . En route visit Fatehpur Sikri, From 1571 to 1585, Akbar made Fatehpur Sikri the capital of the Mughal Empire. It was later moved to Agra. Fatehpur Sikri is filled with magnificent buildings built by Akbar. On the site is a fort that combines Persian and Mughal architecture.Check in at the hotel . Overnight stay at Jaipur.

After breakfast at the hotel, check out and go for sightseeing before leaving for Delhi. Among the top tourist attractions in Jaipur is Amer Fort, a hillside fortress built on a mountain. Its artistic design makes it a unique attraction. Jal Mahal is one of the important places to visit, as are the City Palace, HawaMahal, and Albert Hall Museum. Departure for Delhi.