As the birthplace of Lord Rama, Ayodhya has a special place in history. Ayodhya is located in the North Indian State of Uttar Pradesh. It is one of the most important religious pilgrimage centers in India. Old and ancient, Ayodhya possesses all the characteristics of a city of the old world, as described in the epic Ramayana. The Hindus in India hold a special place in their hearts for Ayodhya since Lord Ram is among the most adored gods in the country. Ayodhya is blessed with a sense of godliness that is evident all around. Hindus flock here in thousands during special occasions like Ram Navami (Lord Ram's birthday). According to the epic, Ayodhya is believed to be the birthplace of Lord Rama. Given its association with Hinduism, it is predominantly a religious tourist destination with all its temples and historical significance.

Visitors come from around the world to Ayodhya, which is commonly considered Rama's homeland. The heavenly delights of this place attract many pilgrims as well. Then, you can chart out your itinerary and enjoy your trip to Ayodhya. It would be a good idea to choose Ayodhya pilgrimage that Offers that fits your price range and your choices if you wish to get the greatest level of delight from your pilgrimage tour to Ayodhya, Uttar Pradesh, India. With this Ayodhya Temple Tour, you will get to see the important tourist sites around the area. In order to understand how to get Ayodhya, it would be sensible to gain a little knowledge about the Reputation of Ayodhya before visiting this divide town of Lord Rama in Ayodhya. Additionally, museums and traditional monuments of this area can be visited in addition to the temples. You may go further on some trips from Ayodhya after seeing the key attractions in Ayodhya. On one of these excursions, you may visit places such as Kushinagar and Faizabad.

It is believed that Ayodhya is the birthplace of Lord Rama. It offers its tourists a host of sights, such as Ram Janmabhoomi and other temples. The city of Ayodhya, in the state of Uttar Pradesh, is located on the banks of river Saryu and has a rich history and a number of legends surrounding it. The Hindu epic Ramayana places a great deal of emphasis on Ayodhya, the former capital of Awadh.

Upon arrival in Lucknow, you are met and transferred to your pre-booked hotel. After freshening up, go out to do a sightseeing tour of Lucknow visiting Bara Imambara, Chhota Imambara, Rumi Darwaza, Hussainibad picture gallery, Clock Tower, Jama Masjid, and Lucknow Residency. Overnight at Lucknow. Overnight stay at hotel.

After breakfast, drive towards Ayodhya (The birthplace of Lord Rama). On arrival, check-in at your pre-booked hotel. After freshening up, go to see the holy sites associated with Lord Rama’s life including the most significant Rama Janmbhumi - The birthplace of Lord Rama. Later visit Hanuman Garhi temple, Kanak Bhawan and Valmiki Ramayan Bhawan. Also explore other holy sites or temples where Lord Rama spent his childhood, Lakshman Ghat, Kala Ram Temple, and several Jain Shrines. On the banks of the holy river Saryu, witness the holy prayer ceremony in the evening. Having finished your tour of Ayodhya, return to the hotel for an overnight stay.

After breakfast, drive to Pryagraj (formerly known as Allahabad). On arrival, check-in at your pre-booked hotel. After freshening up, proceed to visit Triveni Sangam. In Pryagraj, the Triveni Sangam is a point where three holy rivers meet (the River Ganga, Yamuna, and Saraswati). There are several ways you can perform Puja at Sangam, such as taking a holy dip and making offerings. Continue your visit to other places of religious and historical significance such as Anand Bhawan, the Lying Hanuman Temple, Allahabad Fort, Ashoka Pillar, Akshaya Vat, Patalpuri Temple, Alopshankri Temple, and Ajad Park. After sightseeing, return to the hotel for an overnight stay.

After breakfast, drive to Chitrakoot, which is located in Madhya Pradesh. On arrival, check-in at your pre-booked hotel. After freshening up, visit some holy sites of religious importance in Chitrakoot. According to Hindu Mythology Lord Rama, Sita and Lakshmana spent eleven and half years of their fourteen years of exile. Visit Ramghat, Kamadgiri, Bharat Milap, Janaki Kund, Hanuman dhara, Sati anusayia etc. Gupt Godavari Ramghat, and Spathik Shila. After sightseeing, return to the hotel for an overnight stay.

After breakfast, today drive towards Varanasi. Upon arrival in Varanasi, check-in at your pre-booked hotel. After freshening up, wander down the Ghats of Varanasi, and later in the evening, the witness holy Ganga Aarti on the Dashashwamedh Ghat of the river Ganges.

Get a magnificent view of the sunrise early in the morning by taking a boat ride on the Ganges. Watching the Sun God along the river Ganges is a spiritual and mystical experience. A Boat Ride in Varanasi offers the chance to see some of the most famous Ghats in the city, including Manikarnika Ghat (the largest cremation ground in the world), Dashashwamedh Ghat, Assi Ghat, and more. Once you return to your hotel, you can enjoy breakfast before heading out for a city tour of Varanasi that includes the Heritage temples and the city center. The tour begins with a visit to the Durga temple, the Tulsi Manas temple, the Sankat Mochan temple, and the Bharat Mata temple. Visit the most famous Kashi Vishwanath Tem9 9 ple and other Varanasi temples later in the day. You will have the chance to visit Annapurna Temple as well as Kaal Bhairav Temple.

Spend the afternoon visiting Sarnath. It was at Deer Park (Rishipattana) that Lord Buddha delivered his first sermon in Sarnath. Buddha temples, Dhamekha Stupa, Chaukhandi Stupa, and an archaeological museum are some of the tourist attractions in Sarnath. Return to Hotel for Dinner and Overnight Stay in Varanasi.

Today after breakfast, departure transfer to board flight or train for onward journey.

Places to see in Ayodhya

The The Hanuman Garhi:

Hanuman Garhi is a Hindu temple in Sai Nagar dedicated to Hanuman, a Hindu deity. It is believed that Lord Hanuman lived in a cave here and looked after the birthplace in the center of the town. There are 76 steps to climb to get to this place. There is a custom that leads people to visit Hanuman Garhi before visiting the Ram Temple in Ayodhya, making it one of the most important temples in Ayodhya. The temple site guarding Ayodhya is believed to have been home to the Lord Hanuman.

Kanak Bhawan: According to legend, Maa Kaikai gifted it to Sita. Lord Ram's statue and his wife's statue are inside the sanctum, which is supposed to be their home. It stands northeast of Ram Janmabhoomi in Tulsi Nagar. This temple was built in 1891 and is also called Sone-ka-Ghar. Goddess Sita, the wife of Lord Rama, is honored at this sacred site.

As the original residence of King Dashrath, ruler of Ayodhya and father to Lord Sri Ram, Dashrath Bhavan is located in the heart of the city, in Ramkot Ayodhya, Faizabad. Dashrath Mahal houses magnificent shrines of King Ram, often called Bada Asthan or Badi Jagah.

Nageshwarnath temple: Lord Ram's son Kush built it as a memorial to a girl he loved. Even though the whole city was destroyed, this temple survived and allowed Vikramaditya to collect the evidence. This is the place where Shivrathri is celebrated. It is situated adjacent to Ayodhya's Theri Bazaar. The temple is dedicated to Lord Nageshwarnath.

Swarg Dwar: Lord Ram is believed to be cremated here.

Treta ke Thakur: The Ashvamedha Yajna is believed to have been performed here by Lord Ram. This temple is located along the Naya Ghat of Ayodhya and houses several idols, including those of Lord Ram, Sita, Lakshman, Hanuman, Bharat, and Sugreev. Black sandstone was used to sculpt these statues.

Sita Ki Rasoi: An ancient kitchen used by goddess Sita herself, Sita ki Rasoi is located in Ayodhya's Rajkot on the north-western side of the Ram Janmanhoomi. In addition to housing some exhibit vessels, this sacred site is quite close to the Ram Janmabhoomi. Sita Ki Rasoi, one of two kitchens named after her, is a basement kitchen.

Jain shrines:Ayodhya is considered the home of the five tirthankaras in the Jain tradition. Therefore, five temples have been built in their honor. 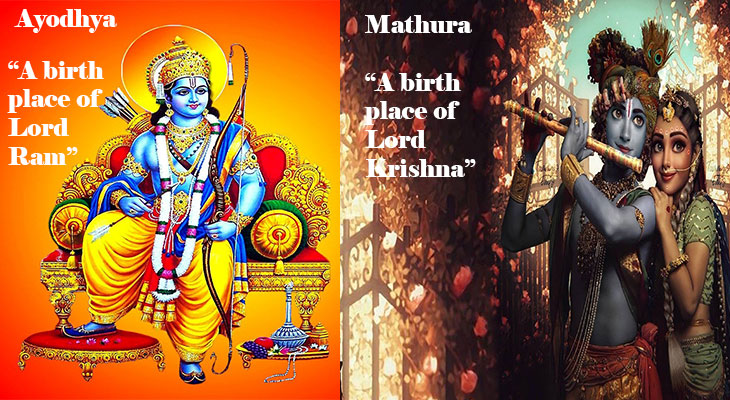